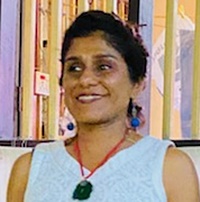 My uncle raises chickens for eggs. To facilitate egg production, he bought a rooster. The brood runs around in the grass in the back of his house, which was my grandmother’s before it became his, and the house where I spent my summer vacations as a child. It is an old two story built in the ‘50s, in an urban village in central Kerala on India’s south western tip, where garish apartment high-rises with flashing neon names intrude into skies whose emptiness was, until recently, broken only by the starfish-shaped silhouettes of coconut palms bobbing in the wind. The land behind the house is overgrown, with patches of grass running into piles of loose red soil, a raised coop for the chickens, and leaves and fallen branches of banana trees. At the far end of the back yard is an abandoned, overgrown cowshed, dark and musty from disuse, that housed my late grandmother’s buffalos. The milk cow is tethered to a spot outside it. The chickens roam the land between house and shed.

In January, I flew to Kerala from New Jersey out of a sense of urgency, to visit my mother, when the pandemic showed no signs of ending. The morning after I landed, hearing the birds whistle and exulting in the warm air coming in through the windows, I rushed out of our house with my iPhone on video mode and began recording. I recorded my mother’s garden, then opened her gate and entered my uncle’s backyard. Things went smoothly, until I came upon the chickens. They cooperated, by ignoring me, and my camera naturally zoomed into the rooster. He was flamboyantly pecking at the air, jutting his head forward at imagined enemies, with his scarlet comb and wattle – the loose bags of skin that hang from the beak – trembling, a kingpin on the march. I stopped. This was a catch! I leaned in, sticking my own head towards him. Whatever happened next, happened swiftly. The rooster bristled. It lunged. Then it fanned its wings, reared grandly, filled its flashing sails of red and black, and flew at me, perching just a foot away from my face on the top of a fencepost that appeared miraculously to break its path and save me from a direct and awful peck. I barely held on to my iPhone as I fled, aware that my slippered feet were kicking up clouds of red dust. End of video.

I related the story to my mother—who rolled her eyes—and to Sathya, the young woman she employs to cook and clean for her, and a longtime aide-de-camp. Sathya nodded vigorously, pointing to a long bamboo stick, six times the rooster’s height, leaning against the gate. “It’s my weapon. In case he attacks.” Then she grinned sheepishly at me. The rooster’s impact was replete: where it struck fear it also doled out humiliation, and all who hesitated, or carried sticks for self-defense, or ran from it, were contrite. Our cowardice bloomed like a waxing moon each time someone discussed the rooster.

I watched later that day as Sathya escorted her 5-year-old son, stick in hand, across the backyard and into my uncle’s house, where his playmate lives. She had given us a rollcall of the rooster’s victims: it had pecked her son (his wail made her drop the pot in the sink) and his skinny father (marks on his arms) and had nearly pecked her too. It had also charged at his caregiver, a well-built father of three who lives behind my uncle’s house and is paid to take care of the chickens and the cow.

“I cannot believe you are all so frightened of a rooster,” my mother said, scornfully. Sathya shook her head — disappointed that even I, the daughter, could not convince my mother, her employer, of why the rooster needed to be feared. But I had, at least, joined her club. I was one of many humans who were too chicken to cross paths with the rooster. Consider the implications of the puns in this sentence. If you are too chicken to cross paths with the rooster, you will be confined to your house, unable to stroll across for a neighborly visit to your uncle, maybe even having to drive out in a car to make that visit, lest, god forbid, you be waylaid by that territorial bird along the shortcut. Yet you must be a chicken, and can only be a chicken, to truly cross the rooster’s path, to truly embrace and examine its roosterly magnificence. Some of these bold chickens even went on to lay eggs—a catch-22 in language and in life.

As with all testy situations, there is always one that brings things to a head. My mother needed an official document to be delivered to our house by my uncle’s office manager, who works out of my uncle’s back porch. The word ‘back’ is key, because the location of his office inadvertently requires the manager, Jacob, to set foot in the backyard, and trespass the rooster’s domain, to visit the guest bathroom. My mother informed me after getting off the phone with Jacob that such trespassing had occurred only twice in the past month, and Jacob had been pecked on both occasions through his Demin jeans, as he descended from his air-conditioned office into the wild world beyond. Therefore, he had given up visiting the bathroom during the workday, had compressed his working hours and simply left early to avoid stressing his bladder. The rooster, not the pandemic, was his impetus to telecommute. He could not risk walking across the backyard to bring the document to my mother. He did not apologize for the inconvenience.

The task now fell into my lap. Would I collect the document from him and bring it over? As with parents and children, especially expatriate adult children, this was not a request as much as it was a command. Yes, I said, without flinching. My mother and I examined each other briefly, the challenge in her eyes ignored by me, the hesitation in mine, ignored by her. Our filial bond is littered with such instances, and a measure of the success of our relationship is that a therapist has never had to intervene in this primal negotiation.

I opened the gate. I looked left, right and left again, as I had been taught in school. No rooster. Yes, I took the stick. I made it across and into Jacob’s office. There was an air of despair in the room as he handed the document to me. His desk was clean, and his computer asleep. He was not as busy as the chickens, which I could hear outside, pouring out of their coop, squawking and clucking. He had the manner of a tired prisoner. “Hello, I’m Jacob. I think the rooster attacks people in jeans. It’s a good thing you’re in a skirt.” To my shock, out came his own bamboo pole (the waxing moon of our mutual cowardice flared briefly in the noon sky) and he gallantly insisted on standing guard on the steps outside his office as I crossed over.

And there it was! It literally clattered across the yard toward me, crowing, half flying, half running, beating albatross wings attached to a poultrine body — in these gestures both rooster and I mimicked each other, if you substitute limbs for wings in my case, one chasing, the other fleeing. Behind me, I heard Jacob’s door bang shut. Ahead of me stood ever-grinning Sathya, who swung the gate open, let me in, and did not miss a beat: “I heard you yell.”

But the stakes were fated to rise, again. Jacob called. A signature was missing. I would need to take the document back. “No,” I said to my mom. “No way.”  My mother grunted, seared me with her eyes, slipped on her sandals, and said, “I’ll do it then!”. This is the appropriate moment for that break in narrative arc where I describe my mother to the reader. She is a goader to action, a challenger of status-quos, a girthy grandmother who incites grandbabies to mischief, a deservedly mythologized high-school English teacher whose 50-year-old ex-students organize reunions around her schedule, with her permission. Sathya and Jacob, those banished oarsmen of a dried-up Styx, brandished their poles and watched from opposite ends of the yard, with me — the Nick Carraway to my mother’s Gatsby — as she marched across with the document, looking neither left or right, though she did pick up a twig, and twirled it like a baton in a brass band. The rooster muddled around near the fence. A little breast-beating, but no more. So it was that mother and bird, both roosters among chickens, levelled with each other, while fools suffered.

Time to reassess threat levels, pivot, act. A Google search revealed that the frantic pecking-at-the-air was a mating skill called ‘tidbitting’. And where were the ‘pecks’ on Jacob’s jeans? I had seen none. Clearly, the rooster knew to play its cards. It knew when to hold ‘em, fold ‘em, and o did it know when to fan ‘em. It was, basically, a bully, an impresario who sniffed out interlopers. As with boxing rings and interview panels, the trick was to show no fear. I could act now, or forever be triggered by waxing moons.

So, I walked across, the sun in my eye, and nothing happened. Later that afternoon, I heard Sathya follow suit, closing our gate behind her with her child, and I did not hear him wail. But the greatest freedom would be Jacob’s, because that evening, he descended his unholy ladder and crossed over to us, the final, completed document in his hand, signed, sealed, delivered. A string of sweat beads on his forehead gleamed like diamonds, hard-earned, worn with pride. “Thank you,” his eyes grew liquid as he handed my mother the piece of paper. “For dinner tonight,” he announced, “I have asked my wife to cook us a chicken.”

Mary Ann Koruth is a journalist and creative writer. She is a transplant from India, now rooted in Central Jersey soil. Her writing explores experiences spawned from her life in both of these worlds and everywhere in between.