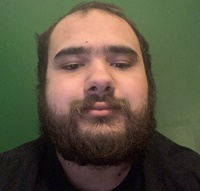 I barely had enough time to see the truck coming.

Crazy what happens to someone when they don’t look both ways. I did it almost religiously when I was younger, but as I got older, I started doing it less and less. Long as you paid attention, you tended to make it out alright.

Turns out that the reason they were so persistent on that rule was simple. If something bad happens and you’re not prepared for it, you’re not going to get a chance to fix it.

All I got was that split second staring ahead at the rampaging metal monster, watching it spin out of control as it raced towards me. I didn’t have time to think, much less be afraid. There was just the feeling of metal crashing against my bones.

I ended up waking up somewhere else, like I was waking up from some sort of dream. Any wrinkles or white hairs I had acquired were gone, like getting hit by that truck somehow turned back the clock on my existence, and my existence alone. I was back in my prime as a young adult.

Only problem was I didn’t know why.

I couldn’t really ask anyone about it without being laughed at like a crazy person. I tried to go to some of my friends and ask for help, but obviously when you were in your fourties a minute ago and you’re practically eighteen now, people don’t really believe you are who you say you are.

One cold night on a park bench later, and I realized that I was going to have to start over. Find a new name, new job, new everything. This was a fresh start for me, and I was gonna have to use it.

That new life lasted about twenty years, until I got stuck in a freak electrical accident, shocking the life right out of my body. Again, I woke up in my prime. Again, I needed to start over. I wasn’t sure why I kept getting these chances, but I felt the need to try to make the most of it.

That ‘reset’ lasted ten years. Car accident was what did me in that time, massive pile up in the middle of the street. Then I woke up again, younger.

This kept happening, again, and again, and again. Every time I died, I’d come back to life, but I’d die in half the time I lived last. Five years, then two years and six months, then one year and three. The time just kept dwindling and dwindling with every respawn, and the anxiety was starting to get to me.

I don’t know what’s going on, why I’m gifted with this curse, or why it’s getting shorter and shorter, but I can’t help but panic with every passing second now. I don’t want to know what’s going to happen if I run out of time to give. Will it be a month of life this time? One week? One day? One hour?

When does this end? How do I make it stop?!

I’ve spent days since this rebirth just looking around, trying to think of any memory, any reason for this constant cycle of death and suffering to occur. Every time I respawn, my ticking clock gets shorter and shorter, and it’s complete and utter torture.

…but then I realize I’ve sort of answered my own question. This is torture. It’s a kind of torture that mere humans could never accomplish with weapons or guns. It’s psychological suffering on a constant, unending scale, which only really leaves one possible answer to this riddle.

Almost immediately, I hear a gruff, disembodied voice laugh at my realization. It’s like the world around me suddenly burns to a crisp, leaving me in an unending darkness that I can’t stare through, but I know is staring back at me. Paranoia incarnate.

“Well done!” the demon, be it Satan himself or something more focused, taunts me. “Most people with your spirit fail to grasp their situation until they’re forced through that final loop of constant misery. You must have been pretty perceptive to pick up on that so soon.”

“S-so what now?!” I scream out into the void, unsure of what else to do. The mere realization of what’s happened to me too much to bare or comprehend. “Now that I know what’s going on, this isn’t really torture in the same way, right? Why’d I even end up here in the first place?!”

“You think you get to know?” The demon scoffs. “No one in these depths remembers what they’ve committed. To give them the satisfaction of knowing they truly do deserve the torture they go through is hardly a punishment. True misery is the paranoia, the fear of not knowing what’s ahead.”

“…then what about me?” I wonder aloud, trying to stay brave in the face of utter despair. “I already know the suffering you’re putting me through, so how are you going to keep torturing me like this?”

“That, my friend, is simple,” it laughs. I can’t see its face, but I know it’s grinning that horrid, awful grin.

…but then Darkness takes my mind. My mind leaving me, slowly but surely. My sentience feels like it’s being torn away from me, my skull burning from both ends.

It’s a bright sunny day, the light twinkling off my gray hairs as I walk down the sidewalk, heading towards the nearest intersection. The streets have been busy lately, full of traffic all over the place. For once though, I’m lucky. It’s been almost a full minute and not a single car or truck has passed on through.

There’s no need to look both ways, right?

Xavier Paris studies creative writing at Full Sail University. He lives with his father and stepmother, and is planning to move to Florida to study on campus.