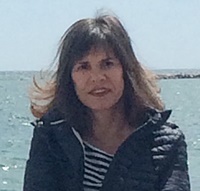 “Oof!” She sighs in exasperation.

I’m in Belgrade for a visit.  Fadina – I’ve called my mother by her first name since I was a child — is restless and annoyed.

She walks around the apartment, tidying, to distract herself.  For as long as I can remember there has been no love lost between us.  We pretty much loathe each other.

Having me there is driving her crazy.

I don’t know why my mother is nuts –- she just is.  And she’s always kept me on my toes because I never know when I’ll have to dodge yet another volley of hurt.  I live well away from her, an ocean away, on another continent.

Her pacing is interrupted as the front door opens, and my brother walks in.

“How was Vienna, Rob?”  “How’d it go with your editors?”  She’s positively gushing. The two of them have always been close.

My brother is a journalist. He’s covering the civil wars rending Yugoslavia apart.

Rob’s three years older than I am and he’s a lot taller.  His habitual ironic stare makes me feel even smaller.

Without preamble, he marches towards me and says: “What’s with that look on your face?” And the next thing I know, he strikes me on the head with a blow so powerful it knocks me from the chair to the floor. And then he proceeds to beat the living daylights out of me.

It hurts, it hurts terribly.  Still, I have to acknowledge that there’s a flow to the beatings and to my mother’s frenzied dancing around us. It’s theatrical in a way – quite dramatic.  Too bad there’s no audience.

As abruptly as it burst forth, my brother’s rage subsides.  He doesn’t move.  He looks down at me sprawled on the floor.  And that may well be a look of contrition on his face.

I seize the moment and run to the front door.

And as I run, the world slows down, stops, and bends out of shape, turning into a warped version of itself.  I hear my mother calling out in her normal, everyday voice:

It’s lunchtime.  To the table please.

Anita Lekic has lived in many countries, including Brazil and Egypt, before settling down in Portugal.  She writes nonfiction and fiction.  Her articles have been published in Counterpunch and The Local, Germany among other journals, and her short stories in Streetlight Magazine, Cagibi, Typishly, and Wanderlust.