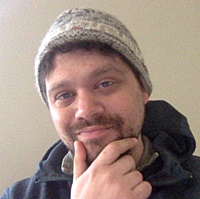 What can I say? I was a pot head. Of course, it was more complicated than that. I needed an escape because I was so blind to the way life really was, that a person had to suffer, and had to work through that suffering in order to be able to really appreciate the splendor of life. Instead of suffering and working, I chose to get high.

I was away at school, my freshman year, at the College of Charleston. I was smoking a lot, mainly with my friend Jeff. But after a while, I began to feel guilty for smoking his weed. I offered to pay him, but he refused my money. In any event, one night, he was out of weed, and I was jonesing. I left my dormitory late in the evening, maybe around nine o’clock, to go search for some weed on the street. I was walking down George Street, and it was bustling, but all of the people whom, usually I would have paid close attention to, I paid no mind to at all. I wasn’t looking to meet any co-eds. I only had to walk a good five minutes before I spotted exactly the type of person I was looking for. Standing against the red brick wall of some building, trying to seem aloof, was a tall, well-built black man wearing a blue cap, black leather jacket and loose fitting blue jeans. His big, sallow eyes were rolling about, looking at the passersby with little interest and a lot of expectation. I approached.

He saw me and nodded his head. I nodded back. “Hey,” I said.

He looked me up and down cagily. “Wassup? You lookin’ for somethin’?”

“I was hoping to get some weed,” I said. I pulled out my wallet.

“Yo! Chill brah. Put that shit away. I ain’t tryna’ get arrested.”

I put my wallet away.

I continued to follow him. We walked past Calhoun Street and kept going. I had never been past Calhoun Street before. The further we went, the seedier it got. At some point, it began to feel like we were walking through a post-apocalyptic landscape. There were open lots overgrown with weeds, with low, crumbling stone walls. There were houses interspersed—old, run down houses that seemed to be crumbling to their very foundations. It seemed we walked for over an hour. There were almost no people. The sidewalk was crumbling. There were hardly any trees. Just a lot of bushes and weeds.

“Are we almost there?” I asked him.

We arrived at a large, old house with no yard. A group of people were sitting on the front porch. In the dark, I couldn’t make out their faces. The man turned to me. “Aright, how much you want?”

“Give it to me,” he said. I took out my wallet and handed him the money. “I’ll be back in a crack.” He turned around and ran toward the house. He looked like a kind of specter as his black leather jacket and jeans flowed around him as he practically soared over the ground and up the steps. I waited. Nothing could be heard except the sound of crickets and the faint unintelligible voices of the people on the steps, from where I thought I saw a large, overweight man in a wife beater looking at me. The blue moonlight shimmered off the top of his round bald head.

After several minutes, the man came back. He seemed pleased with himself. “I hooked you up,” he said. “Look at this shit.” He opened his hand and showed me a round white object the size of a large M&M. I immediately knew what it was.

“But I wanted weed,” I said, trying to sound not disconcerted.

His eyes suddenly became very large and very dark. Then, his pupils focused, and he looked me square in the eye and stood up straight. “OK,” he said. “I’ma’ get your weed. I’ma’ take this and sell it to my boy. He gon’ hook us up.” He turned around and began to walk. I followed him.

“Where are we going?” I asked.

“We headed back to the school.”

I was relieved to hear this. We walked about a minute when we came to a large brick wall separating two vacant lots. “Hold up one minute,” he said. “We gon’ smoke somadiss crack rock real quick.” He pulled out a red glass pipe and went behind the wall. He turned to me. “Ain’t you finna’ smoke?” he asked.

Satisfied, I waited for him to get his fix. After he smoked, he came over and showed me what was left of the rock. It seemed reasonable.

We walked back toward the college, and when we were in a field across from a line of shops, he suddenly cried out: “Oh shit!” Then he bent down as if to search the grass for something he had dropped. “I fuckin’ dropped that shit,” he said.

I looked, but I didn’t see anything. After a while, he seemed to give up. “Hold up,” he said. “Lemme’ go and grab my boy right quick. He got some weed. You keep searching for that rock. I’ll be back real quick.” And he ran off across the street. I kept searching, but couldn’t find the rock. Then, it suddenly occurred to me: he hadn’t dropped it at all. It was all one big ruse. I cursed myself for being so stupid. I shrugged, and began to walk back toward my dorm.

On the way there, I saw the man crossing the street as if in a hurry. I heard the sound of a car horn, the screeching of tires, and then a loud crash. The man was thrown nearly twenty feet before he landed on his back on the pavement. Along with several others, I ran over to him. He was in a great deal of pain. He saw me, and he lifted his arm to show that he wanted to say something to me. I bent down and listened. “Take the crack,” he said. “It’s in my pocket.”

The sound of sirens could be heard in the distance.

Daniel Senser is originally from Cincinnati, Ohio. He attended the University of Cincinnati where he received a BA in English. He began writing in elementary school, but started his career as a poet his freshman year of college after reading The Iliad. He was also greatly influenced by ancient Eastern poetry, the works of Jorge Louis Borges and other Hispanic writers, as well as contemporary writers such as Billy Collins and Charles Simic. Works by Daniel have been featured in such journals as: Adelaide, Jewish Currents, and California Quarterly, among others. He currently lives in Cambridge, Massachusetts.