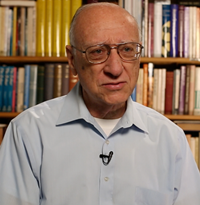 God made human beings because God loves stories. (Elie Wiesel) There are all kinds of stories. Some are taken from reality and processed through inspiration, other rise up from an instant of inspiration; and become real after being told again and again. (Isabel Allende)

Some stories are true because they accurately describe a unique event that happened at a certain time and place. Other stories are events that once happened and have subsequently been dramatized by creative minds or faithful hearts. Archetypical stories that have been retold over the course of thousands of years are true; not because they actually occurred once; but because they continually reoccur in many places and times.

One such archetypical story, transmitted orally in both Arabic and Hebrew for very many centuries; and finally written down in the mid 19th century, in both languages and in several different versions; reveals a truth about the religious importance of true brotherly love.

The following archetypical fable illustrates how two holy places can be as closely connected as a pair of two lungs, even though they are far apart geographically and exist in different religious worlds. Some say this transcendent narrative happened in the generation when Abraham lived.

“Two brothers who inherited a ‘valley to hilltop’ farm from their father divided the land in half so that each one could farm his own section. Over time, the older brother married and had four children, while the younger brother was still not married.

One year there was very little rain, and the crop was very meager. This was at the beginning of a long term drought that would turn the whole valley into an arid, treeless, desert where even grain did not grow, and all the springs dried up.

The younger brother lay awake one night praying and thought: “My brother has a wife and four children to feed, and I have no children. He needs more grain than I do; especially now when grain is scarce.”

So that night, the younger brother went to his barn, gathered a large sack of wheat, and left his wheat in his brother’s barn. Then he returned home, feeling pleased with himself.

Earlier that very same night, the older brother was also lying awake praying for rain when he thought: “In my old age, my wife and I will have our grown children to take care of us, as well as grandchildren to enjoy, while my brother may have no children. He should at least sell more grain from his fields now, so he can provide for himself in his old age.

So that night, the older brother also gathered a large sack of wheat, and left it in his brother’s barn, and returned home.

The next morning, the younger brother, surprised to see the amount of grain in his barn seemed unchanged, said “I did not take as much wheat as I thought. Tonight I will take more.”

That same morning, the older brother, standing in his barn, was thinking the same thoughts.

After night fell, each brother gathered a greater amount of wheat from his barn and in the dark, secretly delivered it to his brother’s barn.

The next morning, the brothers were again puzzled and perplexed. “How can I be mistaken?” each one thought. “There’s the same amount of grain here as there was before. This is impossible! Tonight I will make no mistake—I will take two large sacks.”

The third night, more determined than ever, each brother gathered two large sacks of wheat from his barn, loaded them onto a cart, and slowly pulled his cart toward his brother’s barn. In the moonlight, each brother noticed a figure in the distance.

When the two brothers got closer, each recognized the form of the other and the load he was pulling, and they both realized what had happened!

Without a word, they dropped the ropes of their carts, ran to each other and embraced.”

Christians and Jews say the hilltop is Jerusalem. Muslims say the valley is Makka. I say that both views are correct.

God gave humans one heart to love God as individuals, and a pair of lungs to enable religious  communities to continually recycle the holy spirit of God within human beings, among human communities, and between all humans and God.

When all those, both near and far, who revere these two sacred places as a standard, share it in love with everyone else who reveres it, then Abraham’s request for Allah to “make this a land of peace, and provide its people with the produce of the land” (Qur’an 2:126) will be extended throughout the world; and all children will live in Holiness, Peace and Prosperity.

If we all can live up to the ideal that brotherly love and religious pluralism as the will of God, we will help fulfill the 2700 year old vision of Prophet Isaiah: “In that day there will be a highway from Egypt to Assyria. The Assyrians will go to Egypt, and the Egyptians to Assyria. The Egyptians and Assyrians will worship together. In that day Israel  will join a three-party alliance with Egypt and Assyria, a blessing upon the heart. The LORD of Hosts will bless them saying, “Blessed be Egypt My people, Assyria My handiwork, and Israel My inheritance.”…(Isaiah 19:23-5)

Allen S. Maller is an ordained Reform Rabbi who retired in 2006 after 39 years as the Rabbi of Temple Akiba in Culver City, California. His web site is: www.rabbimaller.com. He blogs on the Times of Israel. Rabbi Maller has published 650+ articles in some two dozen different Christian, Jewish, and Muslim magazines and web sites. He is the author of two recent books: “Judaism and Islam as Synergistic Monotheisms’ and “Which Religion Is Right For You? A 21st Century Kuzari”